We hope you are keeping well and looking forward to what is hopefully a slow but steady road back to normality for Australia and New Zealand.

All of us at Coates are eager to get back out on the road with you, and we remain positive about the remainder of 2020. Watch this space!

In the meantime, we bring you another tour tale to get you exited about getting back to nature. Our Karlamilyi (Rudall River) National Park Expedition travels to some of the most remote outback destinations in the state; Karlamilyi NP itself is actually the largest and more remote national park in WA.

This reflection is written by Patrick Bates and is about his experience on the tour in 2018. We hope you enjoy! 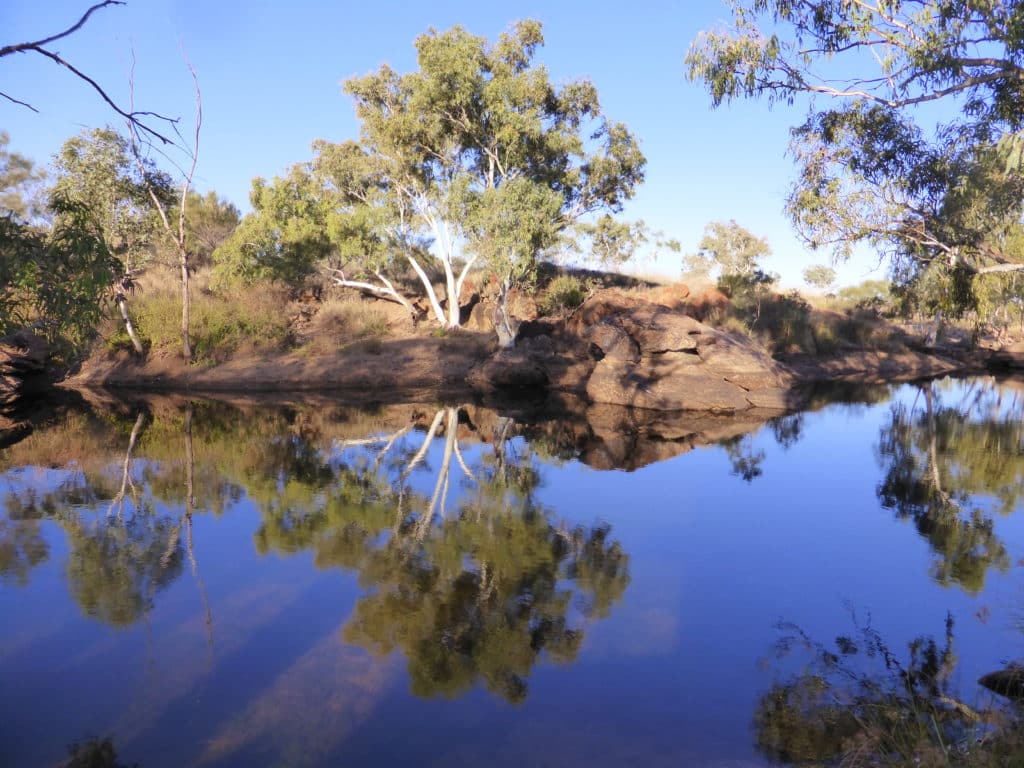 Karlamilyi National Park (formally know as Rudall River NP) is probably one of the least known parks in Australia. Even most West Australians you ask will look blankly at you and ask, “Where’s that?” For those of you who don’t know, Karlamilyi is located in the East Pilbara, is the largest national park in Western Australia and is one of my favourite places to visit. However, found some 1,500 plus km from Perth and 900 plus km from Broome it’s fair to say the park is a bit out of the way. However, as they say, half the fun is getting there!

Now, this particular version of Coates’ Karlamilyi trip departs from Perth and finishes 13 days later in Broome. In the past, this tour has been run differently, for example, Perth to Perth or Broome to Newman.

As most Coates tours do, this tour started with an early departure from Perth. Our trip consisted of 9 passengers, three guides (including myself) and our three 4WD’s. Each guide picked up three passengers from their Perth accommodation and we headed north.

As I said above, Karlamilyi is a fair distance away and takes a few days to get there, luckily there are some great stops along the way. One of my favourite places along the way is the small gold rush town of Cue. In the early 1900s the town boasted a population of about 10,000, but today it is just under 200. Although many of its residents left Cue over the years, it is still jam-packed with history. The town is home to many historic buildings including the shire office, government building (still being used as the post office and police station), old gaol and rotunda. The shire office, apart from being an excellent example of early Australian architecture, is also home to another treat. We visited the office and discovered a treasure trove of the past. The walls, covered in framed photos from the heyday of the town, gives you a feel for what life was like.

Another favourite part of Cue was just a short drive down the road. Big Bell is a ghost town just 30km south-west of Cue and is home to the ruins of the Big Bell Hotel. Abandoned in the 1950s the town is all but gone. All that remains is the hotel ruins, some house foundations and the old roads. The hotel itself is an excellent example of art deco and was once credited with the longest bar in Australia.

Now not all trips are destined to run as smoothly as we’d hope. A few days into the tour, we were planning to camp at Ophthalmia Dam the night before we entered the Karlamilyi. Unfortunately, when we arrived we found that camping was now prohibited at the dam and we had to think of something quickly. We decide to continue up the road we would be travelling on tomorrow, to look for somewhere off the track to set up our bush camp. Luckily only a few km’s up the way we found a small track leading off the road. One of my fellow guides Alan was sent down the trail to see if a suitable clearing could be found. He calls back over the radio. He had found a clearing at a dry riverbed that would be suitable for our group. The campsite turned out to be a winner and we all settled in for the night. That night we were also treated to an astrological show. The cloud cover that had been present for the first few nights had cleared and the moon, planets and stars had come out. The moon was waxing (we would enjoy the full moon a couple of nights later in Karlamilyi) and this was also the first night I saw Mars. I remember how red it looked, even to the naked eye and this started my love affair with the night’s sky. Living in a city, you forget the wonder of the night sky and stargazing is always one of my favourite things to do now when I go bush.

From here we weren’t far from the park. As I said above, Karlamilyi isn’t widely known, so it makes sense it isn’t highly visited. Because of this, there is not much infrastructure. A hand water pump at the north and south entrance and not much more than that. The roads in the park are like a lottery. Sometimes they can be smooth as silk and other times they can be rough as guts. This year we had the latter.

Flooding had occurred at Lake Disappointment (south of Karlamilyi) and those who were travelling the Canning Stock Route were diverting to Karlamilyi to pass the flooded lake. As a result, the road had taken a hammering and driving was a little bumpier then we had hoped, but we finally arrived at our first campsite in Karlamilyi.

We set up camp on the banks of the Tongololo Creek. The creek itself wasn’t flowing at this time of the year, however the soak did hold a good amount of water and was ideal for those who wanted to take a dip to cool off. Across the tree-lined creek was another point of interest, a quartz outcrop that stood above all of the surrounding lands. Only a short walk from camp, the natural uplift of the land provided a great view of the surrounding landscape. The other property of the outcrop that makes it a favourite of mine is how photogenic it is. In the late afternoon, the quartz catches the light of the setting sun in such a way it almost seems to glow!

This camp would be our base of operations for the next two nights as we explored the surrounding areas. We travelled west along the creek to another water hole called Tjingkulatjatjarra Pool (just a bit of a mouth-full, commonly abbreviated to T pool). This pool rarely dries out and is a great place to sit and bird watch. While we were there 100’s of finches would wait their turn to come down from surrounding trees to have a drink from the water’s edge. Most of the finches were Zebra Finches (common across most of mainland Australia), but the patient and eagle-eyed would also sometimes spot the brightly coloured Painted Finch hopping across the rocks.

Another one of my favourite parts of Karlamilyi is the landscape. The terrain in this part of the park is almost like a moonscape. Vast fields covered in quartz virtually like snow; you feel like you are on another planet. The fact that this park is so isolated also gives the land this untouched quality that you rarely find anymore in our globalised world.

After spending a few nights at this camp, we pulled up stakes and headed to our next camp location in the national park, Desert Queen Bath. As the name suggests, this natural pool is so spectacular it is definitely fit for a queen. Situated in a valley of two rock outcrops, we camped in the wide-open valley just outside the narrowing rock walls where the rocky pools form spring-fed baths. The pools themselves are a fabulous place to take a dip, although, as the rocky wall almost always shades them, they can be a bit chilly. I’d say its best done after a good hike exploring the area!The rocky walls of the valley also provide an excellent home for macropods, and the permanent water supply attracts a plethora of birds and reptiles. After three nights enjoying the area around the baths, we again turned north. 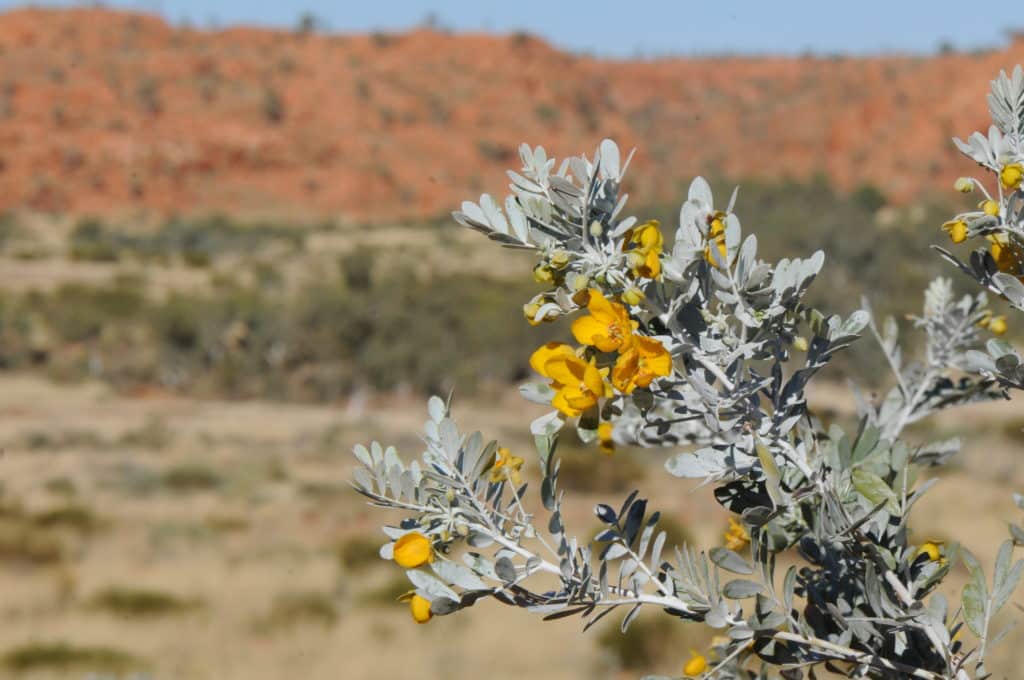 Leaving Karlamilyi behind we travelled the sandy (and I mean very sandy) track towards our camp spot for the night; Christmas Pool. So named by William Rudall when he arrived at the pool on Christmas day while searching for the missing members of the Calvert Expedition, But that’s a whole other story. When you read how Rudall describes the pool, you can be forgiven for being a little disappointed. The pool is seasonal and the lovely flowing waterfall has long since dried from the wet season to when we visit in the middle of the dry. However, the pool does hold great significance all year round with direct evidence of Rudall’s visit over 120 years ago. When Rudall came to the pool years ago, his group carved their names and the date in the rock behind the pool. This carving is one of my favourite talking points of the tour. Speaking with our guests all agree that if I carved my name in the rocks that would be vandalism and not on. I then asked if what we are looking at is vandalism or is it history? From here, the answers get a little more diverse, but it always leads to a good discussion.

Further north we head to our next campsite at Carawine Gorge. Not only is Carawine a spectacular sight in itself, but being an abundant source of water, it is home to a diverse range of birdlife (we even saw a sea eagle there and Carawine is over 200km from the ocean). However, my favourite part of Carawine is the geological history that is wildly abundant in the area. The many flat-top hills surrounding the gorge are capped by the ancient lakes and river beds. These caps formed by harder sediments in the waterways, protected the ground underneath from erosion. Seeing the height of these hills and a how much higher the ground level was, makes you appreciate what hundreds of thousands of years of wind and water can do to change the landscape. Nearby we also viewed polished granites. These rocks were polished (given a shiny, smooth surface by a glacier slowly sliding over its surface) over 60 million years ago. Lastly, in the sediment layers of the gorge face itself, you can see ancient stromatolite domes, fossilised then buried and exposed again.

Departing Carawine, we continue north on our last leg towards Broome. We stop in at Marble Bar on the way through and enjoy a hot shower and a drink at the iconic Iron Clad pub. Continuing north we pass through the abandoned iron ore town of Shay Gap.

Arriving In Broome, we say our final goodbyes as we dropped the guests off at their hotels. If I had to say why I like this trip so much, I would say it is because of the unknown. Many people have been to Perth and Broome, but a lot less have explored the land in-between. And to me, this unknown land is the real treasure of the Australian Outback.

From all of us at Coates, please stay safe and we look forward to seeing you out there again soon.